Leopards are generally shy, solitary animals – cunning and far more silent than lion. They are expert climbers and are found in a wide range of habitats from dense forest to mountains, bushveld and desert. Heavily reduced throughout its range for it’s pelt although probably more common than initially believed. They live close to civilization and will, no doubt, be the last of the large Carnivore to hang on in a diminishing world of wildlife. 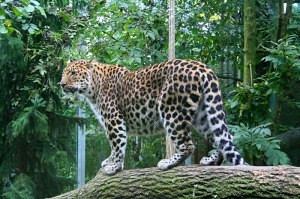 Leopard in a forest

Leopards are more beneficial to man than is commonly accepted in that they control animals that are harmful to crops. Leopards are less easily seen on foot than any other carnivore however, on a mass basis, the most dangerous when wounded. cornered or persistently disturbed. Never, under any circumstances, test a leopard.

They have an incredible diet which ranges from insects to any domestic live stock and includes fish, reptiles, birds, dassies and dogs. They are partial to baboons and will venture to the top most branches in attempt to corner one. The impala form their principal diet in savanna and bush ecosystems where this species is common. They usually kill their prey by biting through the throat and nape of the neck. Large kills are hauled into the fork of trees out of the reach of lions, hyaenas, wild dogs and vultures. They begin feeding on the chest, thighs or around the anus. They lap blood readily which provides their moisture requirements.