Enjoy one of the most popular activities in our region – a visit to the “Big Five” Hluhluwe Game Reserve in an open game drive vehicle with your own well-experienced qualified tour guide who knows the terrain and also where to view the wildlife.

Or you can take along your OWN car and drive through the world-famous Hluhluwe-Umfolozi Wildlife Reserve yourself … the preferred choice for wildlife photographers and independent souls (see the video tips below). 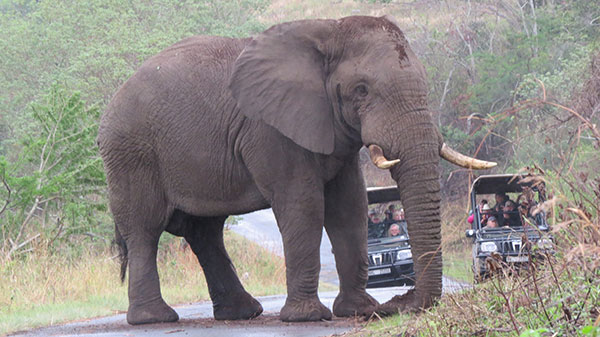 ‘Big 5’ and other mammals

Elephant and buffalo are also easily encountered and the big five cat species, lion and leopard and the endangered African wild dog may be seen.

Hluhluwe and Umfolozi game parks used to form two separate wildlife reserves, but were joined to form a much bigger territorial range.

Hluhluwe-Imfolozi covers 96 000 hectares of richly attractive landscape, with magnificent views of bushveld, riverine forests, mistbelt forests and vast expanses of hills, mountains and valleys, open savanna and wetlands. The reserve boasts a great biodiversity of habitats with over 1 350 plant species.

Hluhluwe Game Reserve is one of the most famous, one of the largest and is also the oldest proclaimed game reserve in South Africa.

Hluhluwe Game Reserve is world-famous for it’s role in saving Rhino from extinction and both black and white rhino abound and are regularly seen. While you’re there, you can take a look at the beautiful Centenary Rhino, which was commissioned to commemorate a hundred years of conversation in 1995.

The Park is home to a rich diversity of over 350 bird species and it has prime birding opportunities. It is one of the only areas in South Africa where the Yellow throated, Pink Throated and Orange throated long claw species can be seen together.

Some of the birds that are to be viewed include night heron, wood stork, wahlberg’s eagle, Shelley’s francolin, black-bellied korhaan, Temminck’ courser, Klaas’s cuckoo, little bee eater and crested barbet.

Video of a Hluhluwe-Imfolozi self-drive

Enjoy this video made by guests of their self-drive experience in Hluhluwe-Umfolozi. It was in the summer month of March and the bush was really thick. They thoroughly enjoyed a birthday brunch at Hilltop and later that evening, we treated them to a special birthday dinner.

Do you have a special occassion to celebrate like a birthday or wedding anniversary? Or perhaps you’d like to “pop the question”?

You could do so during lunch at the Hilltop Camp restaurant overlooking the hills and valleys of KwaZulu Natal, and then continue the mood during enjoy a romantic dinner at Leopard Walk Lodge.

We can assist you with the arrangements if you’d like to include this activity during your stay with us. Let us know if you’d prefer a guided game-drive or the self-drive option in this amazing wildlife reserve. 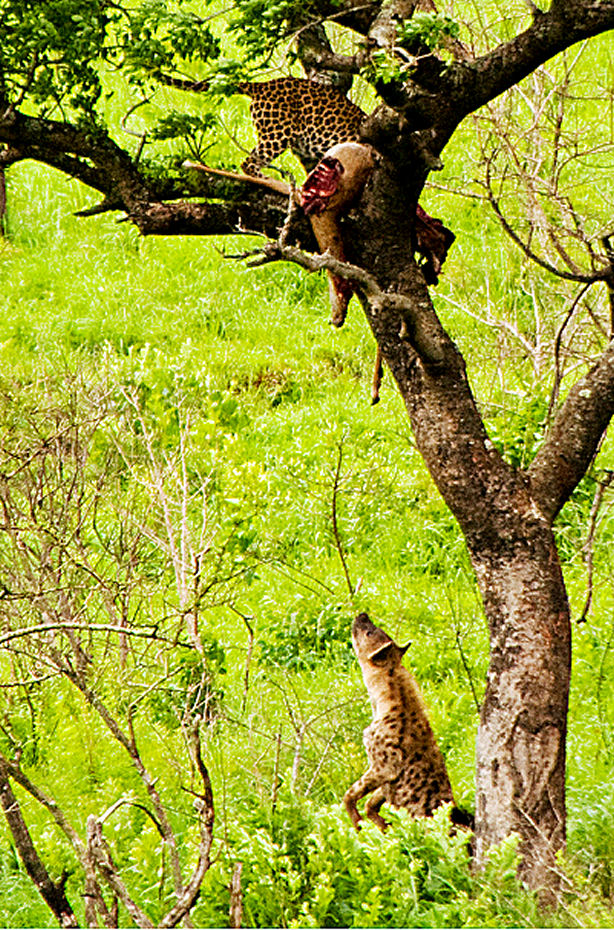 This amazing photo was captured at the BIG FIVE Hluhluwe Game Reserve during one of our game drives which are available for our guests. Leopard often move their kill into a tree in order to keep their meal away from other hungry predators. In this photo, taken by Linda Gaulke, you can see the Hyena trying to steal the kill. Game drives to Hluhluwe Game Reserve are a popular tourism activity which you may reserve with us either before or during your stay at Leopard Walk Lodge.

An update on travelling - We would like to assure our guests, that we will be taking every health & safety precaution, at this time of uncertainty to ensure your stay will be a carefree relaxing getaway you should come to expect. Read More