We are situated in Suni-Ridge Sand Forest Park in the environs of the World Natural Heritage Site, The Isimangaliso Wetland Park. At Suni-Ridge over 350 species are to be found. Whether you are a novice or experienced birder, you will enjoy the rich diversity of bird species which find cover, nesting and roosting in the spectacular sand forest trees and undergrowth. 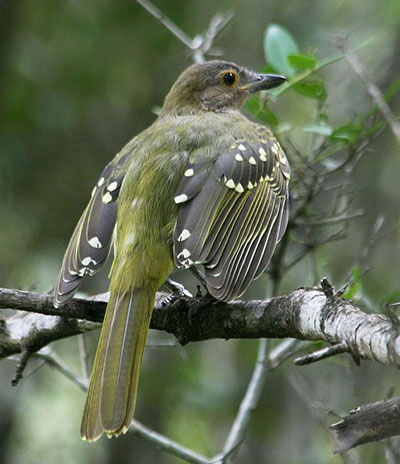 From your glass wrapped room the outlook into the forest provides an advantageous chance of viewing fairly elusive endemic species such as:

together with many other species.

You will find your stay to be situated in a bird watchers paradise, as Leopard Walk Lodge forms part of the Isimangaliso Wetland Park World Natural Heritage Site which is central to the magnificent Elephant Coast of Zululand – Your stay will therefore be in the center of one of South Africa’s most important birding areas and you will be situated in the midst of the well recorded Zululand Birding Route In the surrounding Eco-systems more than 500 species are known, many endemic to our area. 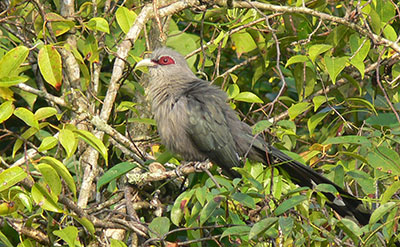 • Your visit to False Bay Park, just 10 minutes drive away will provide further opportunities to view some of the 400 species that are to be found in the area including the Swamp Nightjar, African Broadbill, African Fish Eagle, Yellow Billed Stork, various species of Pelican and Flamingo and others.

• Close by you will enjoy excellent birding opportunities in the Hluhluwe/Umfolozi Game Reserve and also the Mkuze Game Reserve where each reserve has a number of more than 420 bird species that have been recorded.

The Greater St.Lucia Wetland Park World Natural Heritage Site (Leopard Walk Lodge is situated in the environs of this area)

Lake St Lucia is the most important breeding area for waterbirds in south Africa, supporting large numbers of pelicans, storks and flamingos. The greater St. Lucia Park was created to protect this vital wetland and includes the conservation areas of Mapelane, Eastern Shores, Cape Vidal, Sodwana Bay, Charters Creek, Fanies Island, False Bay Park and Mkuze Game Reserve (the latter is dealt with separately). In addition to the wetlands, the park incorporates a wide range of terrestrial habitats and is the most accessible place to see the Zululand coastal “specials”. Day lists of over 100 species are possible in summer. A one or two day stay is recommended.

Habitats that surround the estuary and floodplain are varied and typical of the East Coast Littoral including dune forest, sand forest, coastal thicket, mangrove and coastal grassland (seasonally flooded in places).

The best way to see waterbirds is on a cruise of the estuary, when large flocks of Great White Pelican, Pink-backed Pelican, Lesser Flamingo and Saddle-billed Stork (uncommon, though the best place in KZN for this species). Yellow-billed Stork, Woolly-necked Stork, Caspian Tern, and a variety of waders including Ruff, Ruddy Turnstone, Grey Plover and Pied Avocet. Check the mouth of the estuary for Goliath Heron and roosting terns including Lesser Crested Tern (common). Rarities recorded here have included Greater Frigatebird, Eurasian Oystercatcher and Brown Noddy. Blue-cheeked Bee-eater, Wire-tailed Swallow, Sand Martin and Southern Brown-throated Weaver are easily seen from the bridge over the estuary in summer. The mangroves just downstream from this bridge are a good place to search for Mangrove Kingfisher in winter: listen for its distinctive call in the morning or late evening. A variety of forest birds may be found in the dune forest around town e.g. on the short Gwalagwala Trail, all of which are present, and perhaps easier to see than at Cape Vidal. Buff-spotted Flufftail may be glimpsed crossing a path, or try with a tape-recorder for this elusive species. The small seasonal pan near Sugarloaf campsite has produced Dwarf Bittern in summer.

The trail starts at the entrance to the KZN Wildlife “Iphiva” Campsite. It can take anything up to 3 hours depending on how much time you spend birding. You do not need a permit and walking the trail is free of charge, although a night camped at Iphiva will be well worth it. The Iphiva campsite is near to the Crocodile farm , on the Cape Vidal Road and is well signposted. The trail leads at first through open grassland with flooded pans in places. The trail also leads at times through dense areas of coastal thicket and the edge of the dune forest and provides excellent birding. One of the magic things about this trail is the abundance of small antelope, Zebra and Wildebeest making for quite an exciting walk. Do keep your eyes open though for Crocodiles in the pans and Hippos out of the water can be potentially dangerous. Maps of the trail and guide books are also available from the KZN Wildlife offices in St Lucia. The grassland areas are normally good all year round for Croaking Cisticola, Yellow-throated Longclaw and Grey-rumped Swallow. In the more moist summer months Rosy-throated Longclaw can be flushed from the shallow grassy edges of pans. If you are camping in the Iphiva campsite listen out at night for the Swamp Nightjar calling as well as African Wood-Owl which are fairly common around the campsite. The patches of forest thickets in the grassland are good places for spotting the Southern Banded Snake-Eagle perching in one of the bigger trees, this is probably one of the best areas in South Africa to see this bird. Some of the deeper, more permanent pans are often covered with water Lilies and these are good areas to look for African Pygmy-Goose, White-backed Duck and Lesser Jacana often with big mixed flocks of herons, egrets, storks and Pacific Golden Plover. Along the forest edge Narina Trogon and Green Malkoha are often heard calling and in the acacia thickets of the forest look out for Rudd’s Apalis. The last section of the trail leads through the campsite, the more time spent birding around the campsite the better. The areas near the edge of the dunes are always great spots to see Brown Scrub-Robin which have become fairly tame here and will even come into your campsite and pick up scraps. Keep an eye out for Woodwards’ Batis, Square-tailed Drongo, Dark-backed Weaver, Schalow’s Turaco, Blue-mantled Crested-Flycatcher, Black-throated Wattle-eye and Eastern Nicator (which is easily heard calling from the thickets at the edges of the dune forest). Crested Guineafowl are often seen foraging around the campsites and are also now fairly tame. The campsite is also home to many fairly habituated bushbuck, Red Duiker, Warthog, banded Mongoose, and some very cheeky Vervet Monkeys. At Night Hippo’s and bush pig can be seen wandering amongst the campsites. There is also a short walk from the Iphiva campsite to the beach (starting just behind the youth centre) which is an excellent area for seeing most forest birds, Olive Woodpecker, Grey Cuckooshrike, African Broadbill, African Crowned Eagle, and in the early morning Green Twinspot are often seen along the paths. (DP).

The road to Cape Vidal can be quite bad at times but still accessible with a two wheel drive. There is a daily limit on cars allowed into the reserve, so get there early in peak season. The 40km’s from St Lucia to Cape Vidal is certainly not boring, as along the road is one of the best places to see a whole host of different raptors. Look out for Brown Snake-Eagle and Black-chested Snake-Eagle soaring overhead. Southern Banded Snake-Eagle is best seen along here if you missed it at Iphiva.

About 20km’s from the gate is the parking area for the Mfazana Pan and hides (almost opposite the Mission Rocks turn off). The 20 minute walk down to the pans is good for Chorister Robin-Chat, Narina Trogon, Rudd’s Apalis, White-starred Robin and Olive Bush-Shrike. Both Hides normally have some good waterbirds. Look for African Wattled Lapwing along the shores and Osprey in summer. The hides are also great for viewing hippo and crocodile.

Closer to Cape Vidal just before the road veers left (about 4km’s from Cape Vidal) is the parking area for the Iboma Trail, a walk with most grassland birds, including Croaking Cisticola and Rosy-throated Longclaw in the damp areas. Also check around the numerous palm trees for roosting Swamp Nightjar. The southern portion of the trail runs close to the Mfabeni Swamp which you can see along the road just before Cape Vidal. Red-chested Flufftail is often heard here, and Rufous-bellied Heron occurs. The whole range of reed dwelling warblers can warbler heard. (DP).

The dune forest at Cape Vidal is THE locality in South Africa for Brown Scrub-Robin and Woodwards’ Batis; both species are readily seen along the roads or within the campsite. Spotted Ground-Thrush occur in winter, and Buff-spotted Flufftail occur in the campsite. Livingstone’s Turacoare common and conspicuous by their vocalisations. Other species more easily located by their calls are Green Malkoha, Narina Trogon, Eastern Nicator, Yellow-breasted Apalis and Rudd’s Apalis (the latter restricted to Acacia thick in the coastal forest), Blue-mantled Crested-Flycatcher and Grey Sunbird. African Wood-Owl is commonly heard in the campsite at night. Check patches of seeding grass at the roadside or along the Umvubu forest Trail for mixed groups of Green Twinspot, Grey Waxbill and Red-backed Mannikin.

The Umvubu Trail which starts at the campsite is excellent. The trail leads through incredibly beautiful bush with great sea views and runs along the shores of Lake Bhangazi for a while. The first section of the hike through the dune forest is great for the forest specials, with Eastern Nicator, Woodwards’ Batis, Grey Sunbird and Green Malkoha all easy to find. Other fairly common forest birds to look for are Chorister Robin-Chat, Narina Trogon, Scaly-throated Honeyguide, Olive Sunbird and African Broadbill. African Wood-Owl is commonly heard in the campsite at night. (DP).

The mosaic of habitats around Sodwana Bay to the north hosts similar birds to those of cape Vidal and eastern Shores, including Southern Banded Snake-Eagle and Woodwards’ Batis, although its coastal grassland around Lake Bhangazi North is more extensive and less disturbed. Rufous-bellied Heron, African Pygmy-Goose, Lesser Jacana and Rosy-throated Longclaw are more easily seen here (summer), and in winter Short-tailed Pipit is not uncommon in areas of short grass. Both Kurrichane Buttonquail and Black-rumped Buttonquail have been recorded in the grassland, whilst the coastal form of African Barred Owlet (rare) occurs at forest edges. Swamp Nightjar may be flushed from their day roosts beneath clumps of Lala palms, which should also be checked for the uncommon Lemon-breasted Canary.

The dune forest at Mapelane is the southern limit of the ranges of a number of species including Livingstone’s Turaco, Rudd’s Apalis and Woodwards’ Batis, though these remain easier to see further north. Green Twinspot are commonly heard, less commonly seen, in the campsite. False Bay Park, Fani’s Island and Charter’s Creek are the three reserves on the western shore of the lake and share similar habitats, including dry woodland, sand forest and the grassy margins of the lake. All have self-guided trails which allow access to the woodland and lake shore. Look and listen for Green Malkoha, Narina Trogon, Scaly-throated Honeyguide and Eastern Nicator. African Broadbill is also best located by its frog-like call. White-throated Robin-Chat, Bearded Scrub-Robin, Rudd’s Apalis and Neergaard’s Sunbird are common in the campsite and Pale Flycatcher near the gate, at False Bay Park. Check thickets along the entrance road for Pink-throated Twinspot. The lake edge is not highly productive but African Fish-Eagle, Yellow-billed Stork and various terns and shorebirds may be seen. The more extensive marshy grassland below Dugandlovu Rustic Camp holds Swamp Nightjar and Rosy-throated Longclaw common).