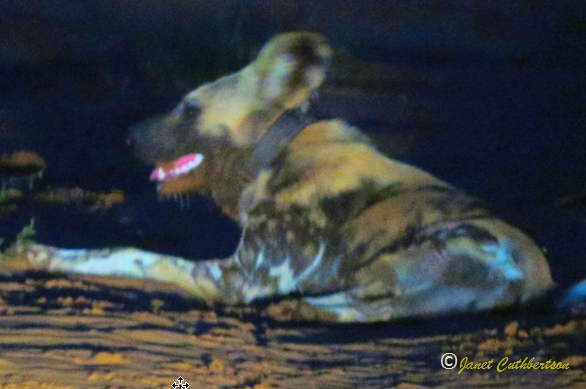 A pack of 6 Wild dogs have been spotted during the evening on 26 March 2017 at Leopard Walk Lodge Reserve. We have been very excited as this iconic species is endangered and they are afforded the highest protection. To have them visit and pass through our reserve is indeed an honor! Last night as we drove down the road towards our Lodge, after entering the reserve, to our amazement we saw the pack lying in the middle of the road. The male had a tracking collar and was quite relaxed remaining in his resting position while the rest moved into the bush. This enabled us to get a few photos and a short video.

Wild dog populations are managed and researched and this pack have apparently broken away from the larger pack in Mkuze Reserve and have been heading south. They are able to move over vast distances and we believe that they headed through the southern boundary of Phinda, over to False Bay Park and through to us at Leopard Walk Lodge Reserve. Wild dog populations are a threatened species due to three main impacts: conflict with human populations,infectious diseases and the fragmentation of their habitat and habitat loss. This pack is not dangerous to humans and we will be looking out for them at our reserve. A way to locate them would be by sound as explained by Clinton Wright, who is an ecologist that is monitoring the pack. “There are 3 sounds you can listen for: 1. high pitched yelping/yapping during physical communication before hunting, while feeding, and when returning from hunt to regurgitate for pups; 2. hoo/whoo calling during hunting or after killing, to regather pack; 3. wolf like howl – only ever heard it on two occasions and it’s much deeper and more hollow than a jackal’s howl, but very rare, and I witnessed it to gather a pack that was separated over a large area, and when a pack was looking for their alpha male quite far from their usual area. Obviously tracking their spoor is made easy by the fact that there are a few and at least one is usually on impressionable ground”

Although we have not heard them today we have seen many tracks and we have followed their movements and continue to do so. The arrival of this pack of iconic species is a reminder to us all that the wildlife reserves, farm lands and properties outside national parks, all play an important roll in the protection of South Africa’s Biodiversity.